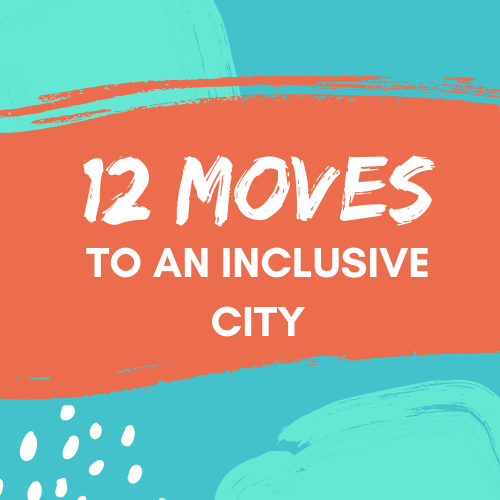 Over the last year York Council’s Local Offer and Participation Officer, Laura Brown has been working on a participation project named 12 Moves to an Inclusive City to understand what young people in York think needs to change to ensure the city is more inclusive.

The proposed idea of 12 Moves derived from the necessity to involve young people’s voice and coproduction in decision making within schools and the higher services. The process involved running designed focus groups within secondary schools, primary schools, a college in York and a mixture of young people’s groups such as Access4All and York’s Youth Council. The session was designed and structured so no additional influences were contributed from adult voice.

The session was completed by 471 young people aged 4-21 years old with representatives from children and young people with additional needs. All of the ideas from around the city were collated into one list of raw ideas from young people. York’s Youth Council then comprised the final 12 from this vast list and this was the outcome:

It is very interesting to see what our young people deem important and we strongly believe that these areas need to be considered to ensure that we are listening to the young people of York.

We now have a valuable representation of young people’s voice which covers a range of topics and issues. Thanks have been given to those education provisions that were involved and we are now encouraging schools across York to listen to their children and young people and work towards achieving one of or some of the issues raised by the young people of York.

Each school across the city has received a copy of the York’s 12 Moves and if they were involved, their school will have a 12 Moves which is specific to their children’s opinions. To view the schools individual 12 Moves, follow the link to York’s Local Offer here.

Please contact Laura at Laura.Brown@york.gov.uk if you feel as though you need more information or if you would like to support this work in any way. If you or anyone else decide to act on the 12 Moves, please let Laura know as she would love to share any lovely work.

What is the 12 Moves Project?

Children and young people across York have been working with the Local Offer Officer to find out what is important to young people in York. We aim to make York a very inclusive city and to do this, we needed to know what needed to change according to young people. After a year in the making, the 12 moves have finally been put together and we cannot wait to share them with you! Watch this space!!